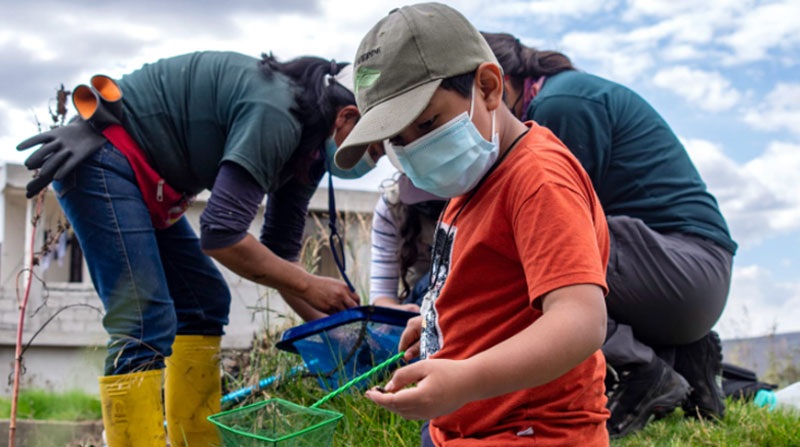 After years of not listening to their songs, the bicentennial park will once again be populated by the Ulian-Willis of the Andean marsupial frog. This Saturday, May 7, 2022, at 11:00 a.m., tadpoles will be inserted into the ponds behind the Pope’s Cross in the park at Old Quito Airport.

The Andean marsupial frog, scientifically known as Gastrotheca riobamba, was one of the most common inhabitants of the wetlands of Quito. The city’s ponds, rivers, and small springs served as breeding grounds for them. But due to urban development, these areas have been filled with concrete or non-native vegetation, which has led to the extinction of native species in Ecuador in different parts of the capital.

Faced with this situation, the Guelumbam Quito Zoo is working to rescue the Uli-Willis of the Andean marsupial frog, which began in 2007. At the time, technicians rescued a population of this species during construction from Tabebala Airport.

The zoo’s director, Martin Bustamante, explained that the frogs were looking for a place with water to store wool-wills. But in the case of artificial reservoirs for drinking water or agriculture, they have high walls or other barriers that prevent young tedpoles from coming out, which eventually dies.

“Our idea is to reintroduce the species into the park’s pools so that people can come in contact with Uli-Willis again,” Bustamante said. He added that, historically, the area that has been inundated for two centuries has been flooded, making it an ideal habitat for the Andean marsupial frog.

The woolly willies that go to Bicentennial Park are found in pools designed for their breeding. Photo courtesy of Guillaume Bamboo Quito Zoo

The first six months of a species’ life are key to its survival. This stage goes away when they begin to grow on the mother’s back, then reach the pond as Uli-Willis and finally complete the transformation. This is when there are a number of threats to individuals, including the presence of predators such as dogs and birds or human intervention that removes the animal from its habitat.

From Saturday, May 7, new visitors to the park will live in a pond inside the bicentennial park, which was built within the framework of the Quito Adapta project and is run under the auspices of the Nera Fabara family. These wetlands will have fences to prevent dogs or other animals from approaching and to keep humans at a distance during this first phase of the species reintroduction.

Bustamante insists that visitors to the park should not throw waste into the pond, they do not need to feed the woolly-willy. He further explained that citizens must protect the vegetation around the area, as the local plant species were located precisely to help the Andean Marsupial Bank offer its song again north of Quito.