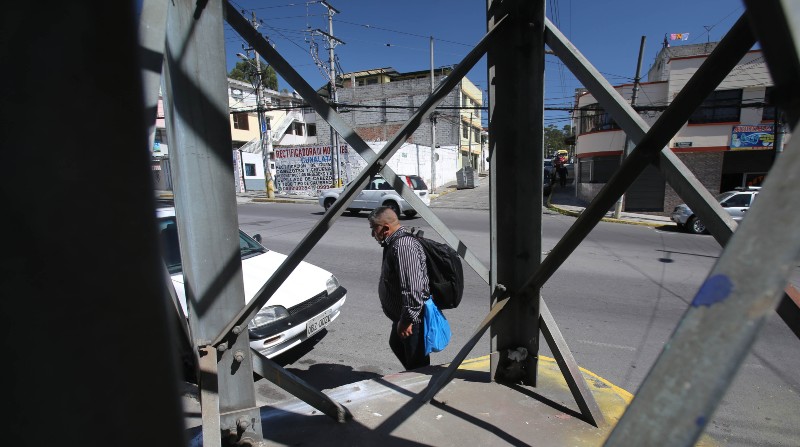 The Metal tower It occupies almost the entire sidewalk. Machala and Legarda are at the corner of the road CotocollaoRises from a transmission tower Quito Electric Company (EEQ), In the middle of a two or three storey house.

The Neighbor They do not know its structure Steel It is used to support overhead power lines where high-voltage power is transported from the plant to the substations. What they do know is that it causes discomfort and fear.

On this basis Cement Interrupts the tower Free transit If you want to cross people, you have to pass by. A wheelchair, for example, will not fit there.

To prevent people from climbing on the structure, sharp metal spikes have been placed around the structure and several signs including the phrase: Danger high voltage.

About 50 centimeters from the tower is the shop of 32-year-old Gisela Alma, who spends 13 hours a day from Monday to Sunday. Sitting on a small stool, he sees his customers approaching the door grill and some sitting at the base of the tower to talk. He said he was not afraid of the consequences of staying near the tower because he did not sleep there even after spending the whole day there. On the other hand, homeowners are concerned about the situation.

Héctor Riascos lived there for 13 of his 62 years. When he arrived, the tower was already in front of his house. Sometimes he looks at the structure, and he’s afraid it might break. In the Pedernales earthquake – remember – it moved from side to side, and “it even sparked.”

In addition, despite the protection of the tower to prevent anyone from climbing, on one occasion they climbed through the steel and entered the second floor veranda of their house. No one from his house goes to that verandah for fear of an accident.

In Quito, the EEQ has registered about 2,100 structures of this type that are 18 to 30 meters high and 3 to 5 meters wide, depending on the voltage they transmit. These are located every 500 or 1,000 meters and are placed as the city grows and demand increases. To find out where to find them, a preliminary study is done to find the most optimal way.

How far should the settlements be located?

According to its regulations ArcotelIt depends on the type of housing. New constructions, that is, structures that come after installation, must be 7.5 m from a 46 kV tower, 8 m from a 69 kV tower, and 10 m from a 138 kV tower.

Despite the high risk in Quito, these distances are not always respected. The EEQ indicated that if the regulations were not complied with, a discharge from the home could occur. If someone accidentally comes across these networks, they have a high chance of dying instantly.

On a tour north of the city, disrespectful people were found in La Ophelia, Pomasque, Calderon and La Pampa.

What will happen if violators are found?

The EEQ indicated that the relevant complaint was made in coordination with the company’s attorney and the Metropolitan Control Agency.AMC) But so far no one was able to send in the perfect solution, which is not strange. The AMC reports that the municipal code does not specify a violation for construction near high-voltage towers. This legal vacuum exacerbates the situation.

Matilda Clavijo, 35, has lived in front of one of those towers for 10 years. It occupies the third floor of a house on Buenaventura Aguilera Street in the Bella Vista Alta sector. The living room of his house is located less than 1.5 meters away from the tower, so he always keeps the windows and curtains closed. He fears that “radiation from the wire” will enter through the window and affect his health.

Alfredo Mina, an environmental engineer, explains that from what is known, these towers produce non-ionizing emissions, that is, they do not damage the cell nucleus and therefore do not represent a health risk, but he warns that this is a matter. Which continues to be investigated as there is still no final research on the subject.

The EEQ does not have the data to show the potential impact, however, it does confirm that there are maintenance operation and transmission line workers who have been working on this activity for over 30 years without any health problems.

The sound of lightning

These towers have another effect, which is created especially in high voltage: noise. At Panamericana Norte, 1.5 km from Portal Shopping, there is a large high-voltage tower: it is over 30 meters high. It does not belong to the EEQ but to the state, and although there are no houses nearby, there are businesses Mechanic and carpentry shops on one side, facilities of private companies on the other side where there is a 24 hour security guard.

Juan Kamacho, 29, who works as a carpenter, said the thing that worries him the most is the noise, especially when it rains. Sounds like a swarm of electricity backs.

There is another similar tower one kilometer away from there. It was built next to a football field, in the middle of the Buena Ventura Housing Complex, in Calderon, with 750 houses. The nearest houses are about 20 meters away, but can be heard, “like a river.” Diego Ruiz is the person who proves that noise increases, especially from 18:00 to 02:00.

The EEQ explained that the effect of this noise occurring at high voltage is known as corona, but it is not considered at the voltage level operated by the company. In addition, the entity’s transmission line does not have the equipment to measure sound.